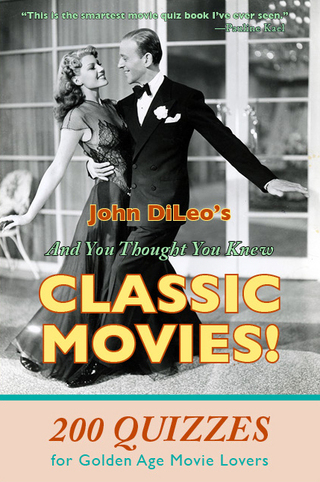 Click on image to purchase online at Barnes and Noble.

And You Thought You Knew Classic Movies!

Sample quiz questions: Can you recall the last names of LAURA, SABRINA, MARNIE and LILI? Which 1930s classic features a character named Oliver Stone? What star (not Humphrey Bogart) is the top-billed male in DEAD END? Katharine Hepburn stars in what play at the end of STAGE DOOR? For what film does Judy Garland win her Oscar in A STAR IS BORN? Name the film in which a cigarette is put out in a nun's hand. Which then-unknown later-famous director was a bit player in THE BEST YEARS OF OUR LIVES?

Pauline Kael said, "It's like a Christmas stocking full of surprises. This is the smartest movie quiz book I've ever seen."

"...not buying AND YOU THOUGHT YOU KNEW CLASSIC MOVIES means you'd be missing out on a really splendid book, written by a tried-and-true movie fan who knows his subject and knows it bloody well."
--Ivan G. Shreve, Jr., THRILLING DAYS OF YESTERYEAR

"This is a must-own for those wanting to spice up their movie trivia nights."
--Kristen Lopez, JOURNEYS IN CLASSIC FILM